Nine writers each select a nominee for the $50,000 award

NORMAN, Okla. (July 16, 2013) – World Literature Today, the University of Oklahoma’s award-winning international literature and culture magazine, today announced the shortlist of nominees for the 2014 Neustadt International Prize for Literature. The Neustadt Prize is the most prestigious international literary award given in the United States, often cited as “the American Nobel,” and is chosen solely on the basis of literary merit. On this year’s shortlist are César Aira, Mia Couto, Duong Thu Huong, Edward P. Jones, Ilya Kaminsky, Chang-rae Lee, Edouard Maunick, Haruki Murakami, and Ghassan Zaqtan. For the first time ever, authors have been nominated from Mauritius, Mozambique, Palestine and Ukraine. Additionally, Jones is the first male African American writer to be nominated in the 44-year history of the prize.

In the next stage of the award process, jury members will convene at OU in October for deliberations. The jury will then vote on the shortlist of nominees to select the winner of the prize, who will be announced on Nov. 1 during the Neustadt Festival of International Literature and Culture. The laureate will receive $50,000, a replica of an eagle feather cast in silver, and a certificate of recognition at a ceremony at OU in fall 2014. For more information on the Neustadt Prize and the fall 2013 festival, visit www.neustadtprize.org. 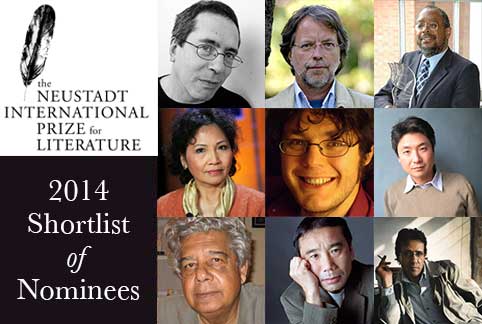 Aira is an Argentine writer, translator and exponent of contemporary Argentine literature. He has published more than 70 books of stories, novels and essays. He writes at a fast rate, producing two to four novella-length books each year since 1993. He also has translated and edited books from France, England, Italy, Brazil, Spain, Mexico and Venezuela. Aira is nominated by Cristina Rivera-Garza, and his representative work is How I Became a Nun.

Couto is the first Mozambican author to be nominated for the Neustadt International Prize for Literature. Couto published a poetry collection, Raiz de Orvalho (Root of dew), in 1983. His first book of short stories, Vozes Anoitecidas, was critically acclaimed in Portugal. An international jury at the Zimbabwe International Book Fair named his first novel, Terra Sonâmbula (1992; Eng. Sleepwalking Land, 2006), one of the 12 best African books of the 20th century. Couto is nominated by Gabriella Ghermandi, and his representative work is Sleepwalking Land.

Duong’s first novels, Journey into Childhood, Beyond Illusions, Paradise of the Blind and The Lost Life, became bestsellers in Vietnam before they were banned. Her next three works, Novel Without a Name, Memories of a Pure Spring and No Man’s Land, have only been published in foreign countries. She was named a Chevalier de l’Ordre des Arts et des Lettres by the French government in recognition of significant contributions to the arts and literature in France. Duong is nominated by Andrew Lam, and her representative work is No Man’s Land.

Jones is the author of The Known World, for which he won the 2004 Pulitzer Prize and the 2005 International IMPAC Dublin Literary Award. His third book, All Aunt Hagar’s Children, was a finalist for the PEN/Faulkner Award in 2006. Jones, an American author, also was awarded a MacArthur Fellowship in 2005 and the PEN/Malamud Award for Excellence in the art of the short story. Jones is nominated by Laleh Khadivi, and his representative work is All Aunt Hagar’s Children.

Lee was born in Seoul, South Korea, and immigrated to the United States in 1968 at the age of 2. His first novel, Native Speaker, won the PEN/Hemingway Award, the American Book Award and the ALA Book of the Year Award. Lee currently teaches creative writing at Princeton University’s Lewis Center for the Arts. Lee is nominated by Krys Lee, and his representative work is The Surrendered.

Murakami, a Japanese author, has been praised by the British newspaper The Guardian as one of “the world’s greatest living novelists.” Murakami was previously nominated for the Neustadt Prize in 2008 and 2010, and he received the Frank Kafka Prize in 2006. His most recent book in English is IQ84. Murakami is up for his third nomination by Deji Olukotun, and his representative work is The Elephant Vanishes.

Zaqtan is the first Palestinian to be nominated for the Neustadt Prize. He is a poet, novelist and editor who has written many collections, including Like a Straw Bird It Follows Me and the play The Narrow Sea. Zaqtan is the founding director of the House of Poetry in the city of Ramallah and has served as director of the Palestine Ministry of Culture’s literature and publishing department. Zaqtan is nominated by Fady Joudah, and his representative work is Like a Straw Bird It Follows Me.

The Neustadt International Prize for Literature is a $50,000 biennial prize funded by a generous endowment from the Neustadt family of Ardmore, Okla., and Dallas. The Neustadt Prize is the first international literary award of its scope to originate in the United States and is one of the very few international prizes for which poets, novelists and playwrights are equally eligible. The charter of the award stipulates that the Neustadt Prize be conferred solely on the basis of literary merit, and each laureate is chosen by a jury of writers that World Literature Today convenes on the University of Oklahoma campus.

Founded in 1927, World Literature Today is the University of Oklahoma’s bimonthly magazine of international literature and culture. The mission of WLT is to serve the international, state and university communities by achieving excellence as a literary publication, a sponsor of literary prizes and a cultural center for students. Now in its ninth decade of continuous publication, WLT has been recognized by the Nobel Prize committee as one of the “best edited and most informative literary publications” in the world, and was recently called “an excellent source of writings from around the globe by authors who write as if their lives depend on it” (Utne Reader, January 2005).