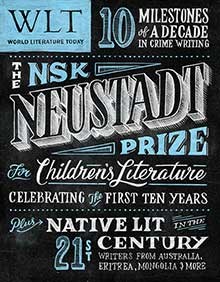 A special section celebrating the first ten years of the NSK Neustadt Prize for Children’s Literature headlines the September 2014 issue of World Literature Today, with contributions by all six past NSK laureates:

The section begins with a retrospective essay by one of the co-founders of the prize, Kathy Neustadt, who recalls being inspired by her three-year-old daughter “to honor the geniuses who could transfix my child, settle her down, wake her up from naps, keep her busy in cars, make her laugh, and sometimes make her cry.” A decade later, WLT is proud to celebrate this milestone of excellence in honoring the best in children’s literature from around the world.

Ready to start reading? Copies of the issue can be found in bookstores throughout the US and Canada or ordered online. For immediate access to the virtual magazine edition, subscribe online for only $15 a year, or start your individual subscription to the print edition for only $30 a year and save 30 percent off the newsstand price.

And mark your calendars! The winner of the 2015 NSK Prize will be announced during the Neustadt Festival on October 24, 2014.