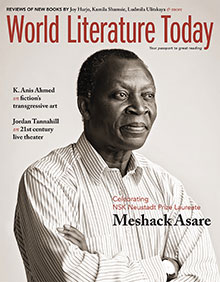 Listen to this new NPR interview with NSK Neustadt prizewinner Meshack Asare—he shares his thoughts on identity and inspiration in children’s literature.

Author and former Neustadt juror Joanne Leedom-Ackerman recently visited Greece and Macedonia to witness the exodus of refugees and migrants into Europe. Read about her firsthand experience as documented on her blog.

Recent Neustadt Prize laureate Rohinton Mistry is among the 69 new appointments to the Order of Canada, one of Canada’s highest civilian honors.

Neustadt laureate Mia Couto is among seven artistic masters who will take on a mentoring role in the Rolex Arts Initiative.

Paper and Salt brings in the new year with this honey-cake recipe that celebrates Norwegian playwright, director, and poet Henrik Ibsen and his adherence to rigid routines.