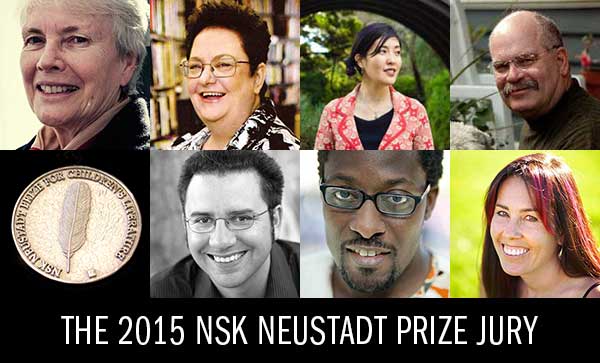 Seven-member jury panel of acclaimed authors to select finalists and winner of $25,000 prize

NORMAN, Okla. (June 17, 2014) – World Literature Today, the award-winning international literature and culture magazine, today announced the jury panel that will be responsible for selecting the finalists and eventual recipient of the 2015 NSK Neustadt Prize for Children’s Literature – a prestigious award given biennially celebrating great works in the world of children’s literature. Established in 2003 with inaugural winner Mildred D. Taylor, the NSK Prize awardees receive $25,000, a silver medallion, a certificate of recognition and a festival hosted in their honor.

The jury panel for the NSK Prize and the Neustadt International Prize for Literature are unique in their exclusive makeup of accomplished, working authors. This year’s NSK Prize jury panel has seven internationally recognized children’s literature authors. The jurors are responsible for nominating one peer author whom they believe to be deserving of the award and deliberating amongst themselves until a winner is chosen. Deliberations will begin in mid-June, and the winner will be announced at the Neustadt Festival at the University of Oklahoma in October.

The 2015 NSK Neustadt Prize jurors are:

The NSK Neustadt Prize for Children’s Literature is awarded every other year to a living writer or illustrator with significant achievement in children’s or young adult literature. Made possible through the generosity of Nancy Barcelo, Susan Neustadt Schwartz and Kathy Neustadt and sponsored by World Literature Today, the NSK Prize celebrates literature that contributes to the quality of children’s lives.

The NSK Prize is highly respected within the literary community for its recognition of excellence in writing. Winning authors are not chosen based on book sales or popularity, but rather on the strength of the content as well as the perceived importance of a writer’s overall contribution to the field of children’s literature. In addition to Taylor, past winners have included Brian Doyle (2005), Katherine Paterson (2007), Vera B. Williams (2009), Virginia Euwer Wolff (2011) and Naomi Shihab Nye (2013).

Founded in 1927, World Literature Today is the University of Oklahoma’s bimonthly magazine of international literature and culture. The mission of WLT is to serve the international, state and university communities by achieving excellence as a literary publication, a sponsor of literary prizes and a cultural center for students. Now in its ninth decade of continuous publication, WLT has been recognized by the Nobel Prize committee as one of the “best edited and most informative literary publications” in the world and has been called “an excellent source of writings from around the globe by authors who write as if their lives depend on it” (Utne Reader, January 2005).

Kathleen T. Horning is director of the Cooperative Children’s Book Center of the School of Education at the University of Wisconsin-Madison and is the author of From Cover to Cover: Evaluating and Reviewing Children’s Books. She has served on numerous book award committees, including the Newbery Medal committee, the Coretta Scott King Award committee and the Américas Award committee. Horning is a past president of the Association for Library Service to Children of the American Library Association and of the United States Board on Books for Young People. Shefrequently writes and lectures about children’s and young adult literature and is a regular reviewer for Horn Book magazine.

Eric A. Kimmel has been writing for children since 1968. He is the award-winning author of the picture book classics Anansi and the Moss-Covered Rock and Hershel and the Hanukkah Goblins, as well as nearly 100 other titles. His honors include the Sydney Taylor Lifetime Achievement Awards and numerous state and children’s choice awards. He is a four-time recipient of the National Jewish Book Award. His middle grade novel Hiss-s-s-s! is currently a nominee for the 2015 Sequoyah Award.

Elizabeth Laird was born in New Zealand to Scottish parents and lived in Ethiopia, Malaysia, Iraq, Lebanon and Austria before settling in Great Britain. Laird has won many awards for her children’s books, including the prestigious Children’s Book Award, and has been shortlisted five times for the Carnegie Medal. She has also written contemporary and historical novels, and her fiction has addressed modern issues in the Middle East and Africa. Her work has been translated into more than 25 languages.

Nii Ayikwei Parkes is the 2007 recipient of Ghana’s national ACRAG award for poetry and literary advocacy. His highly acclaimed literary novel, Tail of the Blue Bird, was shortlisted for the 2010 Commonwealth Prize, and in 2014 the work won France’s Prix Mahogany prize. Parkes writes for children under the name K. P. Kojo, and his book of Ananse stories, The Parade, was selected for the 2012 USBBY’s Outstanding International Books list in the United States. Earlier this year, Parkes was selected as one of Africa’s 39 most promising authors under the age of 40 for the World Book Capital Africa 39 Project.

Kathryn Otoshi is an award-winning author and illustrator from the San Francisco Bay area. Her 2008 book, One, received 10 national awards, including the E. B. White Read Aloud Honor, the Nautilus Gold Choice Award and the Mom’s Choice Award. Other titles include Zero, What Emily Saw and Simon & the Sock Monster. She is also a well-known panelist and guest speaker on children’s literature.

J. L. Powers grew up in El Paso, Texas, and now lives in northern California. She is the award-winning author of three novels for young adults: The Confessional, This Thing Called the Future and Amina. Her first picture book, Colors of the Wind: The Story of Blind Artist and Champion Runner George Mendoza, is forthcoming in 2014. She teaches creative writing, literature and composition at Skyline College in San Bruno, Calif.

Richard Van Camp is a proud member of the Dogrib (Tlicho) Nation from Fort Smith, Northwest Territories, Canada. He is the author of two children’s books with the Cree artist George Littlechild: A Man Called Raven and What’s the Most Beautiful Thing You Know About Horses? He is also the author of three baby books: Welcome Song for Baby: A Lullaby for Newborns, Nighty Night: A Bedtime Song for Babies and Little You. He has three forthcoming books: Three Feathers, a graphic novel on restorative justice; Whistle, a novel about asking for forgiveness; and Night Moves, a collection of short stories. His first solo novel, The Lesser Blessed, is now a feature film with First Generation Films, and the latest cinematic adaptation of his work is Mohawk Midnight Runners, a short film by Zoe Hopkins based on Van Camp’s short story, “Dogrib Midnight Runners.”